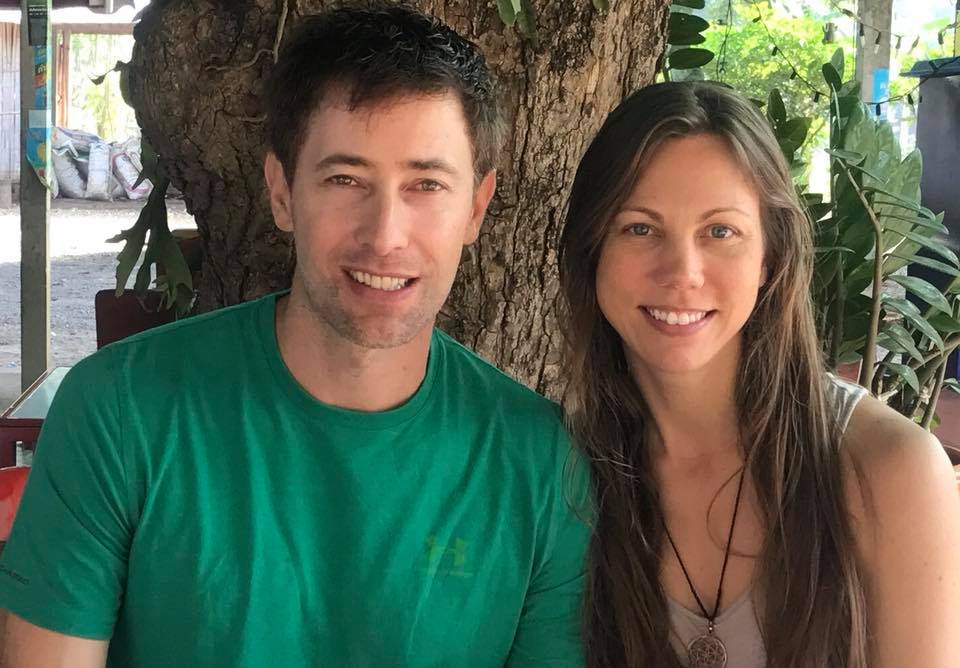 Bags and gear in hand, they traipsed through the driving rain to us, and Elle’s beauty first cast her light upon my eyes

Video: How I met my wife- the need to take risks

I was traveling through Europe during the summer of 2016, then flew to my favorite country in the world-  Thailand. While in Bangkok I was hanging out, doing yoga pretty regularly in the park, meeting up with new people, before heading down South and the glorious beaches of Krabi, where I found myself melting into the sandy paradise.

Thinking how much I wanted to plant my flag there, but faced with the reality my 30 day visa was coming to an end, I returned to Bangkok to fly home.

On a whim, I messaged the yoga teacher I was practicing with, asking if she had an extra mat for her afternoon class, having had to return the one I had borrowed to a friend of mine because of my impending departure. She responded instantly, that she was just leaving, but she’d run back inside and get one, leaving me no choice but head over to the park to meet her, rather than watch the super addictive show, “Better Call Saul” on Netflix, alone in my hotel room.

Just as we were about to start class it started to pour. I’m talking about a deluge, a serious tropical storm. A man approached us and asked if his yoga class could join us under our awning, which offered about 15% protection from the rain. The teacher and I looked at each other, she nodded, so I affirmed to him that they were welcome to join.

Bags and gear in hand, they traipsed through the driving rain to us, and Elle’s beauty first cast her light upon my eyes; I immediately started a conversation with her.

The start of class interrupted us, and even though we were under the awning, our mats and concrete floor quickly became slippery to the point of danger. I’m not sure if we even completed class due to the conditions, but as we were packing up, I approached her again, learning that she was a preschool teacher here in Bangkok, a Canadian (everybody has faults right?,) and had only come to the park because a new teacher at her school invited her, and that it was highly unusual for her to be out on a school night, especially as a two hour total roundtrip from her residence to the park.

Looking back on it, the forces that brought us together, the invite from Elle’s new friend she wouldn’t normally accept, the fact that my yoga teacher had an extra mat which I petitioned for as she was leaving, and the rain storm that forced us to meet; if you are prone to believe in fate, then put this story on your movie poster.

We exchanged information and parted ways. I actually didn’t think much of it, because I was leaving the following evening to go back to America. I posted, before I left, a piece that I had written about my beloved city of Bangkok, and noted that she pressed her “like button” on Facebook.

I sent her a message, and didn’t hear back from her immediately. She doesn’t check her phone all that often I found out later, but when I returned home, she had responded to me.

After speaking over video at length several times, I found myself enchanted not only by her sweetness and laugh, but also the fact that she had a fantastic sense of humor. It’s a required attribute for any mate, at least for me, as I would drive them bonkers if it were lacking.

After a couple of weeks, I offered to return to Bangkok- to go on a date with her. (Insane right?)
It’s an expensive Uber ride from Los Angeles, and the full 24 hours that it takes to get there, is not nothing compared it to all the associated opportunity costs and statistical long-shot that romance is.

But something was just driving me to do so. She was very unsure, thinking that it was a little bit crazy, and told me that she would go out with me, but she was promising me “absolutely nothing.” Having the ability to start my travels anew, and the gumption, I booked a ticket for a couple of weeks later.

Despite my 10:30 PM arrival on a school-night, she told me she would meet me at the airport. I protested, telling her it was too big an imposition and unnecessary, but she insisted.

I have to tell you when I got off the long plane ride, made my way through immigration, and found her inside the terminal, and hugged that pretty flower, I knew something was RIGHT.

We went out the following evening for dinner, and the conversation and laughter flowed.
Her school break was beginning a couple days later, and for two weeks, we traveled around Northern Thailand as friends, showing up at small bed and breakfasts together, and much to the surprise of the owner, getting separate rooms. Towards the end of the trip, we became a couple, and have barely left each others’ side since.
Since then we have explored the world, argued, and laughed much together, and our second child is about to be born.

Sometimes you just have to risk in life. Do the math, and then trust your gut. Even if things don’t work out, you learned something. You’ll always remember the regret of not taking the chance, not attempting to manifest a dream, or to that special person, much more so than things not going as planned.

Remember, you’ll always have a story to tell. Sometimes you’ll even have one like this.