So my wife has a friend, who is a leftist. Posted a video of himself dancing when Biden won, has a severe case of TDS, totally blue anoned.
Except for one small hole in the ship, and it’s taking on water.
He’s Cuban.

So my wife has a friend, who is a leftist. Posted a video of himself dancing when Biden won, has a severe case of TDS, totally blue anoned.
Except for one small hole in the ship, and it’s taking on water.
He’s Cuban.
When the Cuban uprising began, he wrote a Facebook post calling for his Black Lives Matter allies to support the Cuban people. I laughed, because of course, BLM is a self avowed Marxist organization, so who do you think they’re going to support?

And the proof came hours later when they came out with wonderfully telling tweets.
The first was blaming the US government for Cuba’s ills, and the horrendous government and lack of freedoms they have. Not that a Communistic government has ever been anything but a heavenly, nirvana, it’s always someone else’s fault. Of course.
The second was even more telling.  “Rest in Power Fidel Castro”

Now, me being me, upon seeing that, despite my wife’s admonitions, I couldn’t help but forward these statements to this individual.

And quickly, I received a surprising reply, That he now denounces the organization. Pleasantly surprised, I asked whether this was acting as the red pill for him or what changed exactly?

He said he never previously knew and that he has taken a look at the new facts and  and “F them” sitting back in their 4 mansions.

Look, credit where credit is due, the guy examined the new facts in front of him and changed his mind. That is to be commended as rational and fair.

And that brings me to another point. While it is as obvious to me as anyone that each individual life black matters, the organization has benefitted from enormous amounts of propaganda from the main stream media and has used a linguistic shield that any decent person looking at its blinding surface would have a hard time countering.

But once you dive below the surface you quickly realize that below their waves of propaganda are severely toxic waters.

This is an organization in favor of “disrupting the nuclear family.” The biggest privilege you can be born with in our society, no matter your race, are two loving and caring parents. No one is going to take care of you like your parents. And you see the truancy rate, the rates of kids in prison, who grow up without fathers, and BLM actively states they desire to disrupt this?
Why? So it’s easier to brainwash your kids?

They are Marxists. So many people on the left denied this.
“i mean, look at the blinding shiny penny of their name!”

No, they’re Marxist by their own admission as well as actions, and as many of us have heard, when someone tells you who they are, listen top them.

Wherever BLM goes destruction is sown.

They don’t give a damn about the thousands of black youth that die due to inner city violence, they don’t care about 8 year old girls that die when their family car is shot up by their own BLM thugs in Atlanta like Sequoia Turner. You don’t hear that name on the news.

But they’ll destroy entire towns when Jacob Blake, a criminal who was wielding a knife and about to kidnap the woman’s kids who called the police on him, gets shot by the policeman in Kenosha, or Winston Boogie Smith, who shoots at police, misses, and gets killed.

They’ll be out there to peacefully protest and destroy your friend’s business, burn it to the ground.

Or the cop that saved another black girl’s life in Columbus, when likely a BLM advocate, Mikhai Bryant, also black, was about to playfully plunge a six inch blade into the other girls chest.

And Ledumbo tweets out to the cop, “you’re next.” 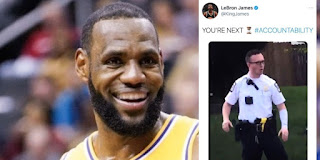 BLM is a marxist organization that hides behind slick linguistic propagandistic shield that wants to destroy the nuclear family, wants to create racial division and install a Marxist government here.

I just hope like my wife’s, at least former blue anoned, Cuban friend, that you finally see this organization as the poisonous, hateful force that they are That’s all. I’m offering you the red pilled on BLM. Remember, all I’m offering is the truth.